The men in Odissi

With exclusive repertoires and movements geared for the male body, this classical dance form is fast shedding its ultra feminine tag
It’s an irony that Lord Nataraj, the creator of dance, is male while his creation has been the bastion of the female. Similarly, although the beauty and popularity of the classical dance style of Odissi owes much to the vision of pioneering male dancers like Kelucharan Mohapatra, it has become famous as a predominantly feminine form.

In recent years, however, the number of male dancers has been on the rise, defying traditional expectations that women dancers might best depict the form’s fluid moves, sensuous curves, sculpturesque poses, and delicate gestures. 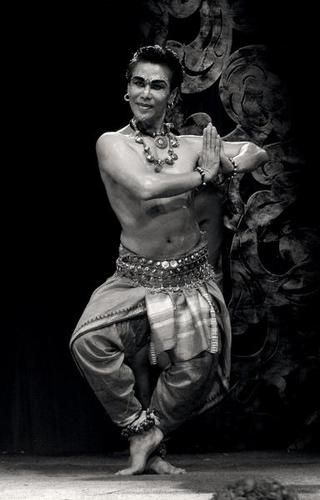 In Odisha, of course, there is sculptural evidence of a strong tradition of male dancers. The ancient Parsurameswar temple in Bhubaneswar has the maximum number of sculptures depicting male dancers while Brahmeswar temple, Megheswar temple, Kapileswar temple, all in Bhubaneswar; Jagannath temple in Puri, and the Sun temple in Konark, built between the 12th and 13th centuries, also have several such depictions. In fact, the ancient dance form of Gotipua, performed by young boys dressed as girls, is considered a precursor to Odissi.

In 1958, however, when Odissi was reconstructed as a classical dance form, the male dancer got marginalised. A prime factor for this was also the socio-economic background of male dancers. While the first generation of female dancers like Sanjukta Panigrahi, Sonal Mansingh and Kumkum Mohanty came from progressive and well-to-do families who supported their dance careers, most of the male dancers came from poorer backgrounds and had to fall back on teaching to make a living.

In 1964, an All-India Classical Dance Festival was hosted in Hyderabad, and Odissi was featured in it for the first time after being conferred the ‘classical’ status. It was here that the late Ramani Ranjan Jena, disciple of Guru Kelucharan, who would later become a well-known New Delhi-based guru, performed. It was the first solo presentation by a male Odissi dancer on a national platform.

Despite Ramani Ranjan’s performance receiving rave responses, there was no conscious effort to promote male Odissi dancers for the next three decades. The much-delayed boost came, finally, in 1996 when Sangeet Natak Akademi hosted an Odissi dance festival in Bhubaneswar in which a large number of men performed. It was followed, four years later, by a seminar and workshop on ‘Purush ang in Odissi dance’ that critically evaluated male dancing and male dancers in Odissi.

It was in 1975 that the late Guru Gangadhar Pradhan’s famed Odisha Dance Academy in Bhubaneswar played a pivotal role in this area. Having started as a Gotipua dancer, Guru Pradhan picked handsome and dedicated young men from the villages, most of them Gotipua dancers, and brought them to his academy.

Here, he not only trained them in Odissi but also ensured their education in the state-run Utkal Sangeet Mahavidyalaya, Odisha’s premier college for the performing arts in Bhubaneshwar. The grooming of male dancers was finally institutionalised. Then, Guru Bichitrananda Swain, Pradhan’s student and arguably Odissi’s best trainer and choreographer to date, who had also served as principal of the Odisha Dance Academy, took the process to the next level.

When Guru Swain had arrived in Bhubaneswar to be a dancer, he was saddened by the plight of male dancers. “Even for the role of Krishna, female dancers were chosen. Like most of my predecessors, I hardly got to perform and ended up as a teacher and choreographer. I realised the urgent need to promote the purush ang in Odissi. I not only trained men but also created special compositions for them,” says the guru, whose Rudrakshya Odissi ensemble, started in 2000, is popular globally.

Today, there is quite a brilliant band of immensely talented male Odissi dancers. While the celebrated Malaysia-based Ramli Ibrahim continues to be a crowd-puller, Rahul Acharya, Lingaraj Pradhan and Yudhisthir Nayak — all winners of the Ustad Bismillah Khan Yuva Prativa Puraskar — as well as Debasis Patnaik and Pravat Kumar Swain have all turned out to be captivating solo performers.

“With increasing awareness and global exposure, male Odissi dancers have certainly come of age. I see a lot more acceptance for them now,” says Rahul Acharya, the erudite dancer who is much in demand today.

Adds Douglas Ridings, the most familiar face among male Odissi dancers in the U.S., “I see a lot of interest and excitement in audiences. I have been given many opportunities to perform across the U.S.”

As Ramli Ibrahim says, “Odisha today has an incredible pool of talented male dancers. With the advent of institutions such as Rudrakshya Foundation in early 2000, with its dynamic founder-guru, the dancers have received international recognition. Bichitrananda’s exciting new repertoires show the male body and and movements at its best.”

The Board of Trustees of Sutra Foundation wishes you Happy Deepavali.

Indian classical dance and its unique relation to Deepavali

Dear friends, Sutra dancers spend time in the weekend recording for a Deepavali program by RTM. Do watch us on Ithu Engal Deepavali on 14 November (Saturday) at 9pm, live on TV2 and RTM Facebook page! Eighteen Sutra dancers shall perform the Indian classical dance of...