Gajapati Maharaja of Puri at Sutra

Sutra Foundation had the honour of hosting Gajapati Maharaja Shri Dibyasingha Deb and Maharani Leelavati of Puri (Odisha) at Sutra House, last night, 15 March, 2016. This is the royal couple’s first visit (unofficial) to Malaysia, stopping for a few days here in Kuala Lumpur, before continuing their journey to a few other countries in Southeast Asia. We were fortunate to have with us, HE Shri TS Tirumurti, High Commissioner of India to Malaysia and his lovely wife, Gowri besides other luminaries from the Malaysian Indian community. Also present were a contingent from the Malaysian Odiyan community who had settled in Rembau (Negri Sembilan). Now full-fledged Malaysians, their first generation had migrated for Orissa to Malaya during the colonial days of early last century. Maharaj and Maharani had had a busy day yesterday, spending the afternoon visiting The Divine Life Society (Batu Caves) where Maharaj impressed audience with his knowledge of the works of the late Swami Sivananda Ji, Founder of Divine Life Society. The late Swami Sivananda, one of the great spiritual leaders of his time, had spent much time in Odisha and established many centres for the needy in this state.  Maharaj also gave a brief but lucid history of the ancient Jagannath tradition of which he is now a Custodian. One of his main objectives is to ensure that the Jagannath Tradition lives on as it had for centuries. Maharaj gave an insightful explanation regarding the inclusivity of Jagannath Tradition, which accomodates different beliefs, be it Buddhistic, Jainist, or the different sampradayas of Hinduism. It must be noted, that Shalabega, the saint-poet whose works allude to Lord Jagannath, often danced by odissi dancers, was a muslim. Sutra dancers gave a lyrical performance of odissi, a new repertoire and excerpt from GANJAM – a more quiet and poetic Sthai, influenced by the sakhinata (boys dancing in girls attire not unlike the gotipua tradition of Puri) tradition of Ganjam. The Sthai is sung uniquely for GANJAM (to be performed next week 23 – 27 March), in the single refrain of swara (sarigama) mode. Maharaj released a hot-air lantern, symbolically, representing the merging of spirits of bi-lateral India-Malaysia ties which have continued since the Kalinga days of yore. It must be mentioned that everyone was captivated by the quiet and regal bearing of the Maharani, who wore a distinctively elegant floral sari, which reminded of us of the bygone era of late rajmata Gayatri Devi of Jaipur. The Gajapati Maharaja and Maharani have left a great impression on all of us with their unassuming but regal present. 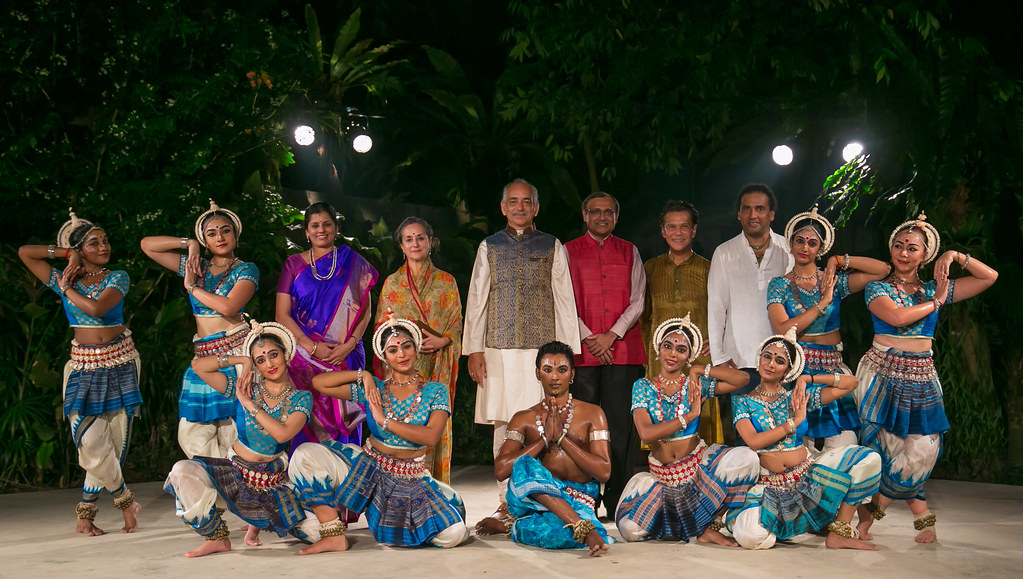