April 22, 2016
Having been witness in Kuala Lumpur’s Istana Budaya auditorium to the spectacle of over twenty Odissi dancers of Sutra render the production Ganjam capturing the flavours of this district of South Odisha, the idea of Ramli Ibrahim heading a crew of eight dancers for an Indian premier sponsored jointly by Shriram Bharatiya Kala Kendra and Indian Council for Cultural Relations in association with Sutra Foundation and the Malaysian High Commission, did not make for exciting news. But one has to compliment Ramli’s creative imagination that even with a small troupe one-third the size of the original cast, he made the Kamani Auditorium resound with applause in admiration. The manner in which the entire group configurations had to be re-worked to retain optimum effect with such a scaled -down group, called for an understanding of performance space which is Ramli’s hallmark. As usual, teamwork was excellent and even without the Istana Budaya stage effects and manipulation of stage levels at the Kamani, what was presented was still riveting. Led by dancer-composer Gajendra Panda’s expertise with manjira and recitation of ukkutas, the vibrant live music of full- throated singing by Sangita Panda along with Satyabrata, with evocative mardal accompaniment by Rama Chandra Behera and instrumentalists provided an inspiring  melodic format as a take-off point for the dance.
The spade work for Ganjam came from artists hailing from the region, who along with Ramli’s flair for artistic direction were galvanised by an urge to inject into Odissi, fresh ideas inspired by the colourful art forms of this region pertaining largely to the theatre, folk, and tribal dances.  The guiding spirit was the approach of late Guru Debaprasad Das, guru of both Gajendra Panda and Ramli Ibrahim, whose abiding belief in the intrinsic identity of a people being reflected in the art forms close to the soil like folk and tribal, regarded these the catchment area for art ideas which could be singled out, stylised and brought, without diluting their intrinsic quality, within the grammar of classical arts. In reflecting a spirit of close cooperation blurring nationalistic boundaries, Malaysian and Indian expertise coming together in making an Odissi production capturing flavours of non-classical forms of a region within Odisha, Ganjam provided an excellent example.
The working nucleus for this magic production comprised the renaissance man from Ganjam’s Digapahandi, author of the book  “Rethinking Odissi” Dr. Dinanath Pathy as literary and visual consultant; Guru Gajendra Panda of Lokhanathpur, Ganjam , a Sakhinata -trained dancer combining Odissi expertise, whose Herculean effort pertained to assembling know-how and material and  composing the dance with use of Sabda syllabic punctuations in the manner of his Guru; musicologist and music composer Gopal Panda, also of Ganjam, who worked on the music; and Banamali Maharana and his disciple  Dhaneswar Swain who have provided nritta inputs with Malaysia providing the dancers along with Ramli’s artistic direction for a group presentation; and last but certainly not the least the lighting wizard Sivarajah Natarajan doing wonders with his stage designs and lighting effects merging unobtrusively with the dance without overwhelming.
Before being tagged on to the State of Odisha in 1936, Ganjam, which historically was part of the old Kalinga Desha, was during British rule under the Madras Presidency bordering on the Telugu speaking areas of the south, its cultural identity a natural blend  of southern and eastern influences. After all,  the Puri Jagannath temple built under King Ananta Varma Chodaganga, born out of the wedlock of an Eastern Ganga prince with a  Chola princess, boasted of some ‘Bhitar Gaonis’ and the ‘Telinga Sampradaya Sevaks’, who hailed from the Telugu speaking areas of Odisha. As a significant contributor to the  culture of Odisha with its poets like Kavi Surya Baladev Rath, the father of the coveted Champu genre of music, Gopalkrushna, Upendra Bhanja and Maheswar Mahapatra, author of Abhinava Chandrika, Ganjam’s rich repertoire of performing art traditions, with their southern fragrance, were kept out of the reckoning when Odissi’s reconstruction took place during the fifties – for it was supposedly  felt that anything smacking of a ‘dakhini’ touch would detract from and dilute the totally indigenous identity (pertaining to the Vaishnavite culture of Puri and areas nearby) of the dance form of Odisha. 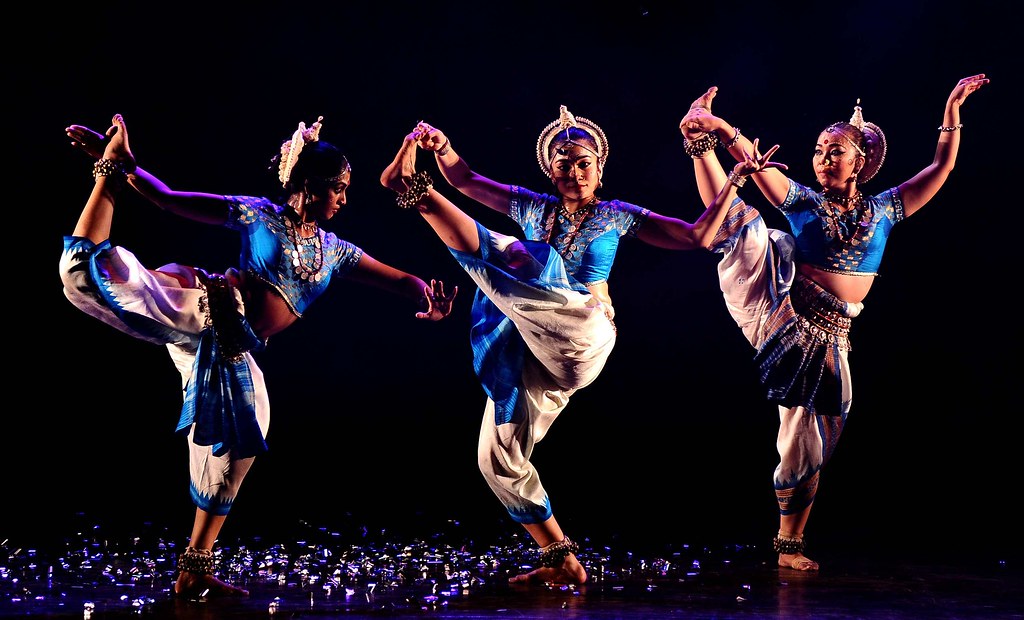 Despite looking at new areas for thematic concern, Ganjam as a production stuck to the classically prescribed Odissi format of Mangalacharan to Moksha. A memorable start was provided by Mangalacharan based on the Narasimha Stotra from Ganjam’s virile theatre form Prahlad Natak with its distinctive style of music rendition, with proximity to Carnatic more than Hindustani ragas. In the fast changing formations one was treated to two sides of this God-  “……..garjantam garjaiyantam Lakshmipate Kamalanabha….” the benevolent Narasimha with consort Lakshmi and the destructive man/lion tearing open Hiranyakashipu’s  stomach and saving devotee Prahlad, the music in Mangala Gurjari  and Lalita was punctuated with Debaprasad Das’ Sabda/swara/patha punctuating syllables. Sthai or Thainata was a delicate weaving of fast changing attitudes of nayika/nayaka – influenced by the Sakhinata tradition of Ganjam, reminiscent of figures seen in palm leaf manuscripts of the region and temple sculpture – the ‘paramparik’- solfa refrain akin to Carnatic Kapi. Sabdas and slokas, described nartaki/nartaka  lakshanas with a long concluding nritta arsa. The item comprised rare rhythmic syllables like “khindiri, dinda, dhindiri dhinda” used by mridangam players of Ganjam.

The unusual group Rama Bhajan, from Nagarkeertana and Rama Natak and Ganjam’s Daskathia was in the raga Mangala Kamodi (the traditional melody was deciphered by Gopal Panda from references in old texts). The words “Bhaja Rama name pada bara bara kari dhyanakara mudha manasare” had a strong religious ring.  But the dancers in very colourful attire of pleated skirts in the manner of Prahlad Natak actors, rendered leaping, high vaulting movements against the magnificent blue Lotus motif background designed by Sivarajah Natarajan symbolising the ‘Rajivalochana’ concept. Visually resembling a series of group panels, this item combined the earthy with the sophisticated and communicated very well with the audience.  Pallavi in the old Rasamanjari raga was electric in its nritta vigor, the constantly changing rhythmic shades giving great variety to the number – along with the deft combination of the earthy and sophisticated movements – exemplifying the ‘’tridhara’’ concept of Debaprasad holding the classical as a continuum of the folk and tribal.
The innumerable entrances and exits were managed with poise by the dancers. The dramatic finale comprised Yogini Moksha bringing alive the tantric incarnations of Sakti – very much a part of worship in Ganjam which is strongly Saivite. Emerging out of Shiva’s third eye, the Yogini manifestations, some gracious but many fearsomely destructive, have their play or lila after which they become absorbed in the Oneness of Shiva which is Moksha. The coverage of floor space reveals the geometry of mandalas in circles and triangles and squares representing the very act of the cycle of creation with birth and death. The mind-boggling pace never showed any monotony. Constantly changing in formations and rhythm patterns, both Gajendra Panda’s creation and the presentation aesthetics of Ramli Ibrahim made the number redolent with strong images and formations, with the baby of the group as sure of her positions as the seniors.
The way dancers lifted with airy ease dissolved into the group again while showing the Yogini images in temple processions, spoke of the training of the young dancers. And full marks for the eye catching well-tailored costumes –sometimes in kachha fashion and at others clad in colourful pleated skirts in the manner of Prahlad Natak performers.
Writing on the dance scene for the last forty years, Leela Venkataraman’s incisive comments on performances of all dance forms, participation in dance discussions both in India and abroad, and as a regular contributor to Hindu Friday Review, journals like Sruti and Nartanam, makes her voice respected for its balanced critiquing. She is the author of several books like Indian Classical dance: Tradition in Transition, Classical Dance in India and Indian Classical dance: The Renaissance and Beyond.